Miscellaneous fake body parts, interactive hospital mannequins, and one storage room filled with clutter is what entailed the DeClutter Coach’s task to help organize MVCC’s nursing lab a few weeks ago. While there was plenty of decluttering to do, there also was plenty of fun to be had.

While in between filming for the show there is a lot of craziness that takes place besides the actual decluttering and organization. While we were finishing up with the nurse’s lab we were lucky enough to be shown some of the high tech instruments that the students use to help stimulate what it’s like to be working in a real hospital. One of these instruments happened to be an interactive mannequin that would respond to you in a variety of ways with the push of a button. Of course we had some fun as Deb played nurse and was asking the “patient” questions only to be shocked by his realistic vomiting and moaning sounds. At one point Deb was even helping a “patient” whose head fell off!

This was my first experience with the DeClutter Coach team in action and I have to say it was a blast. The day flew by and it was amazing to see such a messy room turn into a very clean and organized space. What people really don’t get to see is the amount of fun the team has while helping people become more organized. It was such a great experience to see how appreciative people are of what the DeClutter Coach does and to have as much fun as we did accomplishing it. I look forward to the filming for the next episode and no matter what project the DeClutter Coach takes on you can always sure that laughs will be shared!

Be sure to check out the MVCC episode of the DeClutter Coach when it airs this fall! 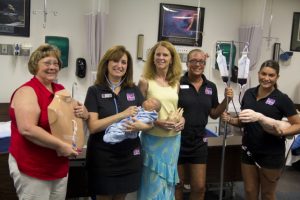